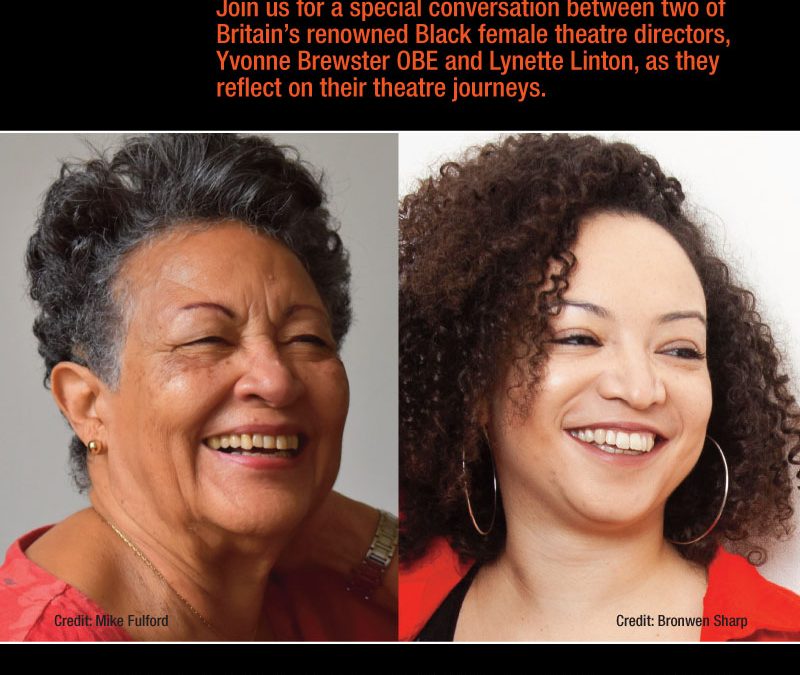 The Alfred Fagon Award is proud to announce the first in a new series of conversations where we’ll be bringing together intergenerational Black theatremakers to share their stories about working in the theatre industry.

This October, theatre pioneer Yvonne Brewster OBE will be in conversation with Lynette Linton, Artistic Director of Bush Theatre.

Yvonne Brewster is revered as a pioneer of Black British theatre.  Born in Kingston Jamaica, she came to the UK to study speech, drama and mime at the Rose Bruford College and the Royal Academy of Music. She was a pupil of Marcel Marceau.  She’s directed plays by Oscar Wilde, Derek Walcott, Wole Soyinka, José Tirana, Pearl Cleage, William Shakespeare and Harold Pinter in the UK, Jamaica, Italy and USA.  She co-founded Talawa Theatre Company in the eighties and has edited five anthologies of plays written by Black playwrights.  Yvonne was awarded an OBE for Services to the Arts in 1993 and is a Fellow of Fellow of the Royal Society of Arts, Rose Bruford College and the Central School of Speech and Drama.

Lynette Linton is the Artistic Director of Bush Theatre, one of the few Black women in the UK running a theatre.  Winner of a Black British Theatre Award for Best Director for directing the UK premiere of Lynn Nottage’s Sweat she has built up a formidable reputation directing plays at Donmar Warehouse, Gate Theatre and Theatre Royal Stratford East before landing at Bush Theatre in 2019 aged just 28.  Bush Theatre is currently celebrating its 50th birthday and she has programmed a season of plays that continue that create debate, broaden audiences’ horizons, and most importantly, entertain. Her production of Pearl Cleage’s Blues for an Alabama Sky is playing at the Royal National Theatre from 20 September 2022.